On 11 May, Amsterdam’s Nieuwe Kerk will open its door for a unique, one-time exhibition about Dutch royal inaugurations. For exactly one hundred days, the church will focus its attention on the festive, ceremonial inaugurations of seven generations in the family of Orange-Nassau: Kings Willem I, II, and III, Queens Wilhelmina, Juliana and Beatrix, and the new monarch, King Willem-Alexander.

The Netherlands is one of twelve European monarchies. Since 1813, its heads of state have all belonged to the Orange-Nassau family, descendants of the famous Dutch stadholders of the Golden Age. All their official inaugurations have taken place in the Nieuwe Kerk. Starting on 11 May, visitors can relive those inaugurations in this historic setting. When the new King Alexander is inaugurated in the Nieuwe Kerk on 30 April, the event is sure to be witnessed on television by millions of viewers. This exhibition will bring the symbolism and emotion of the event to life.

The Nieuwe Kerk is organising this exhibition in cooperation with the Het Loo Palace National Museum. Major loans from the Het Loo collection will be on display, including several royal garments worn at the last two inaugurations. Numerous historical objects from the collections of the Dutch Royal Archives and National Archives, the Rijksmuseum and the public news broadcaster NOS (recent images) take visitors on a journey through time. The stories of seven generations of monarchs convey the history of the two-hundred-year-old Kingdom of the Netherlands. In a televised address on 28 January 2013, Queen Beatrix announced that she had chosen this anniversary year to make way for her son Willem Alexander. What better way to mark the occasion than with a festive exhibition in Dam Square, next to the Royal Palace and in the heart of Amsterdam, which is celebrating many major anniversaries this year. 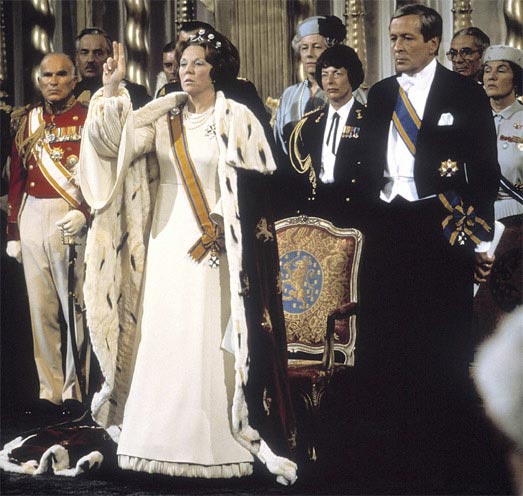 Inauguration ceremonies for Dutch monarchs involve many unique and time-honoured traditions. The exhibition will present these traditions in detail and provide an overview of past kings and queens. Three storylines will bring history to life: the historic inaugurations, the origins of the Kingdom of the Netherlands, and the connection with the princely and later royal family of Orange-Nassau. You can relive the inauguration of the new King Willem-Alexander in an audiovisual installation. The evolution of the royal office and the youngest generation will also be explored. The exhibition will conclude in the present day, with portraits and films of Princess Catharina-Amalia – the soon-to-be crown princess – and her sisters.

Alongside the many beautiful and often moving historical objects on display, the historic church will also play a role in the exhibition. The building contains many reminders of the special relationship between the House of Orange and the Netherlands: its renowned stained-glass windows, the monument marking the Golden Jubilee of Queen Wilhelmina, the large tableau bearing all the coats of arms of the Dutch monarch and the historic brass choir screen that has played a role in so many royal ceremonies. They make the Nieuwe Kerk one of the country’s most royal sites. For fourteen weeks, the church will also host special lectures, organ recitals and other concerts. For example, on the new Queen Máxima’s birthday, Friday 17 May, Carel Kraayenhof will give a concert in the Nieuwe Kerk.

The exhibition was developed by guest curator Eelco Elzenga, who for many years was a chief curator and deputy director at Het Loo Palace National Museum. He will complete his doctoral studies this year; his research topic is the history of royal inaugurations in the Netherlands.